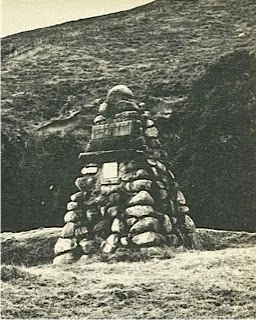 Erected by the Owen Women’s Institute in 1935, this small cairn, once easily visible from the Nelson-Murchison road close to Korere, is a memorial to the pioneers of Hope Valley. A small plaque attached to the cairn lists the names of George Moonlight, George Batt, John Ribet, Robert Edgar, John Rait, Robert Win and Thomas McConchie,
Photograph: Nelson Photo News, No 35, September 14, 1963.

Long neglected and overgrown, the cairn's relocation to Crown land near the former Glenhope Railway station was undertaken by the Rotary Club of Richmond, a project spearheaded by club member, Bob Dickinson. The successful move took place during May, 2014. Along with the refurbished Glenhope Railway Station, it will become a feature of the Glenhope Historic Reserve, which is due to be formally opened in the summer of 2015, just in time for the cairn's 80th birthday.

SOME INFORMATION ON THE MEN COMMEMORATED ON THIS CAIRN

George Batt: Drover and Bullocky
Article at Prow website (Stories of People and Places from Nelson/Marlborough)

John Ribet. From France to Kawatiri: Mine Host of the Hope Junction Hotel
Article at Prow website

Robert Edgar Snr was born at Maybole, Ayrshire, in Scotland. He gave his occupation as a ploughman when he emigrated to New Zealand with his younger brother, John, leaving from Glasgow on the ship Lady Egidia 12 January, 1862 and arriving at Port Chalmers, Dunedin, 6 May, that year..

He moved to Nelson where he married a Spring Grove girl, Priscilla Payton Brewerton (1845-1897) in 1868. Her parents John and Harriet Brewerton had emigrated from England in 1842 on the Phoebe and settled in Waimea South.

After their wedding the couple went to Motupiko in the Upper Motueka Valley where the first of their 8 children was born later in 1868. Around 1878 they shifted to the Hope area.

The Edgars ran an accommodation house at Hope, near Cow Creek and in the 1880s leased Crown land around the Owen Run, which Robert cleared for pasture. During the flurry of quartz-mining around Mt Owen during the 1880s, Robert Edgar also acted as Postmaster between 1887-9 for the Owen Reefs' branch of the Post Office operating at Bulmer Creek.

It seems that his sons (there were 7 of them) were a bit of a wild bunch, and in 1891 Robert sued for slander a local man, Joseph Gough, who claimed that Robert Jnr had stolen some oats from the stables of Gough's employer, Mr Hall, a coach proprietor. The case was heard at the District Court in Nelson and recorded here:

The defence called on several well-known local characters like Robert Win and Tom McConochie who were clearly of the opinion that the Edgar boys were a bad lot. Frederick and James Edgar must have given up their wicked ways as they became respectable citizens who established a business as Edgar Bros., Farriers & General Blacksmiths, at Takaka in 1897, which they ran for many years. 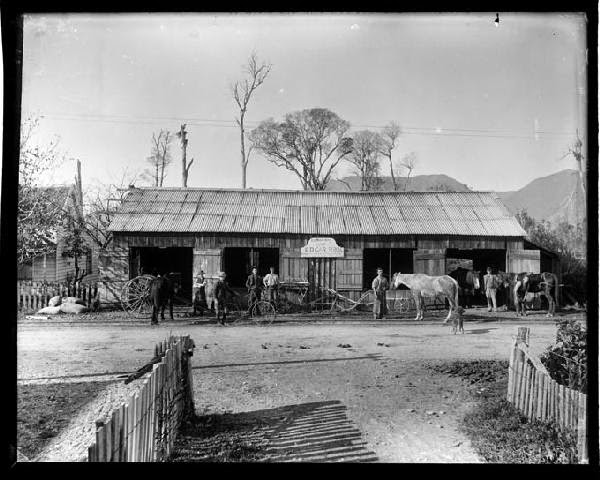 
The following three pieces are taken from
Murchison: How a Settlement Emerges from the Bush, by John R Grigg.
Published 1947
Note:
These have been updated to reflect changes since the time of publication and add information.

Born in Dundee Scotland, John Rait worked as a ship’s carpenter as a youth and in that capacity sailed to Auckland, New Zealand in 1867 from Gravesend, England, on the Warwick. During its outward bound voyage he married on board Mary Oxnam (b.1847),  sister of another Murchison pioneer, Cornishman John Oxnam. Mary, with her parents, John and Elizabeth (née Darlington) Oxnam and siblings was making the voyage to New Zealand to join John Jnr, who had come out to New Zealand via Australia in 1861 and was already gold-mining in the Buller area by 1863. John Oxnam Jnr was one of the earliest diggers, and bought land at Fern Flat, on the outskirts of Hampden (Murchison), in 1872.

The newly married couple accompanied the Oxnam family to the Buller, where John Rait and his in-laws formed a partnership to run an accommodation house at the head of Black Valley in the Roundell. This partnership was dissolved in 1869, presumably amicably, leaving Rait in sole charge of the Roundell Accommodation House. In 1872 he purchased a section in Hampden (Murchison) Village, being the first local resident to do so.

In 1878 the Rait family, which now comprised four sons and two daughters, were occupying at the Hope Junction a log cabin which they used as an accommodation house on the flat where the Kawatiri Junction railway station was later built. There was a record flood in that year and a son, Stephen Rait, recalled being carried as a child to a place of safety away from the rapidly rising river. Shortly afterwards the Raits set up a new accommodation house (built for them by Mary Rait’s brother Stephen Oxnam) on a higher site on the road one and a half miles down the Buller from the Hope Junction.

Stables were added when Newmans' commenced a regular coach service in 1882 but the official connection with Newman Brothers dated from their first historic mail delivery to Hampden in July 1879.The story goes that Tom & Harry Newman overnighted at Rait's Kawatiri Acommmodation House en route to Hampden, arriving in the evening after a challenging day with its fair share of hardships. "Rait gave them a hearty welcome. They marched into his house, mail bags over their shoulders, and as Tom proudly dumped his official freight on the floor, he called:
"Now then, Jack, where can I put Her Majesty's mails?"
"Her Majesty?" exclaimed Rait, off balance for the moment, "who the hell's she?"

The Rait family's next move was to Four River Plain in 1883, when they exchanged Accommodation Houses with John Ribet, so that the Rait children could attend the first school at Fern Flat.

After George Moonlight declared bankruptcy in 1884, John Rait (with the help of John Ribet) purchased the Commercial Hotel and store at auction from the mortgagee, Frederick Hamilton of Nelson, who had taken over Moonlight's debt after buying the business of Buxton & Co.  Rait also acquired a bush section of some 140 acres. While at the Commercial Hotel between 1884-7, the Raits delivered mail, meat and stores to diggers along the Matakitaki as far as Tom May’s Hotel, and the telephone was first installed at that time. The first Murchison Post Office was therefore at the Commercial Hotel. There was a gold dredge working at Fern Flat and a punt took travellers across Buller River there.

While clearing his bush-clad section John Rait was struck by a falling tree and sustained an injury from which he did not recover. He died as a result in 1887, at the age of 47 years.  His family removed to Wellington after his death but maintained a strong connection with Murchison, with his sons David, James and Stephen returning there when they became adults. The Commercial Hotel was  taken over by Charles Downie.

The son of one of Nelson’s earliest settlers, Robert Win was born at Ranzau, later renamed Hope, on the Waimea Plain, in 1852. His father, William Win (Wynne), emigrated from Wales on the Thomas Harrison in 1842 to Nelson, New Zealand, where he met and married in 1851 Harriet Humphries, from Nottinghamshire, who came out from England on the Sir Charles Forbes, also in 1842. They had twelve children.
As a young man Robert went mustering for John Kerr at Lake Station and took up bush-felling contracts. In 1874 he joined a party sub-contracting on a section of the new road over the Hope Saddle. His particular section was in the Clark Valley.

In 1883 he purchased a bush section near Glenhope, but sold it to George Batt. In 1888 he leased John Ribet’s Accommodation House at Kawatiri, and bought it in 1890 when it went up for sale.

He had married Nelson-born Rose Eliza Elliott in that city in 1881 and they had four children - a daughter, Juaneta, and three sons, Lionel, Ronald and Dudley. When the Hope Junction Accommodation House burned down in 1894, the family moved to the Owen. They had a house at Owen Junction, opposite the Owen Junction Hotel, at that time run by George Edwards and his wife. The Owen Junction Hotel had been originally owned by Michael Fagan, followed by his father-in-law, John Ribet.

The second Owen Junction Post office was established near their home in 1898 (the first one opened in 1890, but was closed in 1896), and the Win family ran it for many years. Robert leased some Crown Land, at the Owen Run, which was cleared chiefly by his son Dudley (1887-1968). He himself was mostly occupied on road work. He also later served from 1911 with the Murchison County Council as a councillor for the Owen Riding and by 1916 had been elected chairman of the Council. Like his coontemporary, John Ribet, Robert Win had a great fondness for horses and horse racing. Robert Win died in 1927, but his wife lived on until 1949.  His son Dudley continued to live at the Owen and added greatly to the original holding.

Born in Scotland in 1842, Thomas (Tom) McConochie came to New Zealand with his mother in 1860 on the Ravenscraig. He was first engaged in mustering on Marlborough sheep stations and later managed Red Hills Station.

During the gold rushes he went into business as a butcher at various places – Lyell, Addison’s Flat and the Wangapeka. In association with Alexander Thomson he operated a farm at Wangapeka. In 1893 he acquired land at Glenhope, where he lived until his death in 1914.

Among the many adventurous journeys in his career, one of the most difficult was the droving of several hundred head of cattle to Walker’s Run in the Maruia, travelling along the old Porika Track from the Devil’s Grip to Lake Rotoroa and the Upper Matakitaki River.

The following piece is taken from the Cyclopedia New Zealand: Hope Valley, published in 1906.

McCONOCHIE, THOMAS NEWTON, Farmer, Glenfield Farm, Hope Valley. Postal address, Longford. “Glenfield” is a grazing farm of 1000 acres, near the Hope Saddle. Mr. McConochie was born in Paisley, Scotland, in 1842, and in 1863 came out to Nelson by the ship “Ravenscraig.” He obtained employment on a station in the Marlborough district, and continued at that class of work for some years. In 1868, together with Mr. Alexander Thomson (now of Forest Home, Murchison), he started a butchery business at Caledonian Terrace, outside of Westport. On giving that up, he entered into business as a cattle and sheep dealer in the Nelson, Marlborough, and West Coast districts. In 1885, he took up land in the Hope Valley, where he has since had his home. For some time Mr. McConochie was a steward of the Motueka Valley Racing Club, and he is chairman of the local school committee. He is married and has a family of seven. The school work of the district is carried on in Mr. McConochie's house.

Annis
"What is history but a fable agreed upon?", asked Napoleon. I have an abiding fascination with history in all its forms, including historical fiction. My name is Anne McFadgen and I currently live in Westport, on the West Coast of New Zealand. I formerly lived for many years at Ngatimoti, in the Motueka Valley., Tasman District, NZ. Under my nom de 'net, "Annis", I've written quite a few reviews for historical novels and the odd article under my own name. I used to live next to the Ngatimotil WWI war memorial and as the centenary of WWI approached, I began working on a collaborative project with Ngatimoti historian, Ed Stevens, to retrieve some detail about the lives of the men on the Ngatimoti Memorial who served in the Great War, but have become lost in time. The West Coast has its own fascinating history and maybe after I've lived here longer, its stories will also call to me.