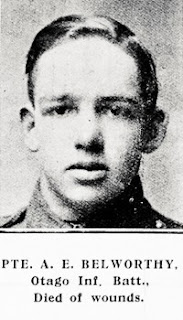 Born in Boort, Victoria, Australia on the 11th of December, 1894, he was the youngest son of Thomas (Tom) and Bessie (née Bradshaw) Belworthy, who had married in Australia in 1889. (Older brother Charles Windsor was born at Stockyard Hill, Vic., Aust., 1890). (1) Arthur’s father, Thomas (b.1860), was listed as a farrier when he emigrated to Otago, New Zealand, from his home of Eton in Buckinghamshire, England. He was the second oldest of four adventurous young brothers who all travelled out together on the ship Wellington in 1883 -  William, Thomas, Charles and Arthur. (2) Possibly tempted by the Victorian gold rushes of the 1880s and ‘90s, Thomas then moved to Australia. He returned with his family to New Zealand and settled in Invercargill when Arthur was about five years old, (3) though the family was established in Caversham, Dunedin by the end of the war. (4)

Arthur was  educated at the Invercargill Central School. After leaving school he worked for two Invercargill businesses;  P. McSkimming and Son and Herbert, Haynes and Co., Drapers and House Furnishers. He was also a keen member of the St. John Ambulance Brigade. He was 20 years old when he joined the Otago Infantry Battalion, N.Z.E.F., in February, 1915 and left Wellington on June 12 as a private with the Fifth Reinforcements.

He was fatally wounded at Gallipoli and died in hospital at Alexandria, Egypt, 18 August, 1915. (5) He is buried at the Alexandria (Chatby) Military and War Memorial Cemetery.

His cousin, William Arthur Belworthy, was also killed during the campaign on Gallipoli. He died 28 August, 1915, and his name is recorded on a commemorative brass plaque at St James Anglican Church, Ngatimoti, Tasman, New Zealand. William Arthur was the eldest son of Arthur Eton Belworthy’s uncle, William, oldest of the Belworthy brothers.

During the war Arthur's father Thomas held the rank of Sergeant-Major and was in charge of the Wakari Military Hospital in Dunedin, at the time a sanatorium for soldiers with infectious diseases, but now better known as a pyschiatric hospital. An older brother, Charles Windsor Belworthy (serial no. 3/4332), was turned down for active service due to medical reasons, but served  for a time with the NZ Medical Corps.

BELWORTHY.—In loving memory of Private Arthur Eton Belworthy, who died on August 18, 1915, from wounds received while in action at Gallipoli. Beloved youngest son of Tom and Bessie Belworthy.
He answered his country's call.
—Inserted by his loving parents and brother. (6)