A Son of the Empire

William Belworthy, baptised in Eton, England on 18 February, 1858. (1), was “brought up to mercantile life”. He came out to New Zealand on the Wellington in 1883 with his three younger brothers Thomas, Arthur and Charles (2). After arriving at Port Chalmers on 8 March 1883 he moved to Invercargill, where he took work with the railways and while there met Grace Couper, born Glasgow, Scotland, 1866. The Couper family had emigrated on the ship Peter Denny in 1870, settling in Invercargill. William and Grace married in November, 1886 at the bride’s Tay Street home. A son, William Arthur, was born in Invercargill on 26 November 1889. It seems that William Jnr was known as Arthur, to distinguish him from his father. He is recorded on the Ngatimoti commemorative plaque as A. Belworthy, which suggests that he wasn't known locally as William.

The family moved to Thames on the Coromandel Peninsula, at that time a bustling gold boomtown which a few years earlier had seemed set to overtake Auckland as New Zealand's largest city. William worked for several years as secretary and accountant at the Thames office of the large London-based Anglo-Continental Gold Syndicate. While there, the Belworthys made many friends. A daughter, Grace Emilia, was born in 1893 and son William probably started school some time after 1894. The children were raised as Methodists. When Anglo-Continental transferred its head office to Auckland in 1896, the family followed. William Snr. was having health issues, and moving to a centre with more advanced medical facilities might also have been a consideration. William Belworthy was promoted, being appointed Secretary in New Zealand for the New Moanataiari Company and also secretary for the May Queen-Hauraki Company, both newly acquired by Anglo-Continental (3). The Belworthys set up house on Domain Street in Devonport and eight-year-old William Jnr attended the Devonport School.

A congenial and popular man, William Belworthy had musical talents and a literary bent. He wrote poetry and was editor of the Devonport Literary and Debating Society Journal. Records of the Society’s meetings show members as a lively, disputatious bunch who shared their work and weren’t afraid to air their opinions. He had a kindred spirit in literary identity David McKee Wright. Born in 1870, Wright was the son of the Rev William Wright, an Irish Congregational missionary, scholar and author. A poet and journalist of note, David McKee Wright came out to New Zealand in 1887. He spent some time in Central Otago, where he worked as a shepherd on backcountry stations, wrote poems and articles for provincial newspapers, then studied for the ministry at Otago University. He was ordained in 1898 as a Congregational pastor. In 1899 he married Grace Belworthy’s sister Elizabeth Couper in Dunedin and they had a son (David) in 1900. For the next 10 years he served as a minister while continuing to write, but eventually abandoned the ministry for life as a fulltime author. (4)
Meanwhile, William Belworthy was losing the battle with cancer that he had been fighting for some time. (5) During his last years the Belworthys travelled between Auckland, Wellington and Nelson, where a brother for William Arthur was born in 1899 - Leslie Beresford Belworthy. In May 1901, David McKee Wright moved with his wife and son to Nelson to take up the ministry there and the Belworthys joined them. The two families had much in common, but happy family get-together turned to tragedy when William Snr died suddenly at the Wrights’ College Hill home on the evening of 27th June, 1901. He was 43. (6)

William Belworthy’s main claim to literary fame was a popular patriotic song composed by James H. Phillpot called Sons of the Empire, for which he wrote the lyrics. This song, written in the florid style of the period, was produced in 1899 at the time of the 2nd Boer War, when feeling in New Zealand for the British Empire was at a high.  David McKee Wright included the song as a tribute to his deceased brother-in-law at an “NZ Evening of Entertainment” he held in aid of the Nelson Congregational Church Improvement Fund on 27 July, 1901,(7) though as an Irish radical, he himself didn’t approve of what he saw as British Imperial aggression in South Africa. His sympathies lay with the Boers, an attitude that didn't sit too well with his parishioners.

After her husband’s death, William Arthur’s mother Grace stayed on in the Nelson area, most likely at Brightwater - her youngest son Leslie was registered at Brighwater School around 1904. By 1905, though, she had moved with her younger children back to Wellington, where she had close connections with the late William Belworthy‘s family. Young William continued his education at the Public School in Nelson and spent a year at Nelson College in 1904, where he trained with the Nelson College Cadets. (8) His Uncle David built a cabin on Crown leasehold land up the Baton Valley in 1907, and William became familiar with the area and fossicked around its historic goldfields while staying there.

When David McKee Wright moved to Australia in 1910 after separating from his wife Elizabeth, William stayed on in the Motueka district (9). The boy who had grown up surrounded by the buzz of the gold-mining industry became a prospector, supplementing his finds by hiring out as a labourer. There would have been plenty of work to be found on the mixed farms, orchards, hop and raspberry gardens of the Baton and Motueka Valleys. The inclusion of his name on a brass commemorative tablet now inside St James Church at Ngatimoti indicates that he was well-known and well-regarded in the area. He lived at some stages in Collingwood, at Bainham and later Mangarakau, where there were active flax- and sawmilling industries. He could also have been working for the short-lived Tai Tapu Gold Estate. It's also possible that he worked at the Galena Reefs in the Wangapeka, where he enlisted in September, 1914. Aged 26 and single, he joined up on the 19th of December, 1914. He may have trained with the 10th (Nelson) Mounted Rifles of the Territorial Force before the war, given that he served as a Trooper with the 10th (Nelson) Squadron) of the Canterbury Mounted Rifles. He was declared dead after going missing in action at Gallipoli on August 28, 1915, (10) just ten days after his cousin Arthur Eton Belworthy died as a result of wounds received during the same campaign.

William's brother Leslie Beresford Belworthy, who went north to Wellington with his mother a few years after his father's death, appears to have returned to the Nelson area. He attended the Whakarewa School on the outskirts of Motueka at different stages between June 1912 and December 1914. (11) Perhaps during this time he stayed with his brother William. He may have found work in the area after finishing school as he maintained a connection with the Motueka and Nelson areas, marrying in 1927 to Kathleen Huia Elliott, daughter of Nelson baker Joseph Elliott and his wife, Amy Ellen (nee Mason), originally a Dovedale girl. Leslie and Kathleen named their first child Arthur after the uncle who never lived to greet his nephew. This might have been an unlucky move - sadly, baby Arthur Beresford Belworthy only lived for a single day, and was buried on 24 April, 1928, at the Elliott family plot in Nelson's Wakapuaka Cemetery, along with his maternal grandparents. Leslie, an upholsterer by trade, lived for some years in Nelson, but in the 1930s moved to Wellington East where his mother was living, and remained there till his death on 29 October, 1965. He is buried at the Masterton Cemetery. Grace Belworthy in her later years alternated between living with her son in Wellington and her daughter Grace Emilia, who moved to Auckland after her marriage in 1921 to Edward James Dyer. The elder Grace Belworthy died in Masterton in 1959.

In 1920 David McKee Wright was awarded the Rupert Brooke Memorial Prize in Australia for a long poem called Gallipoli. It’s easy to imagine that he might have had his lost nephew William Arthur Belworthy in mind when he penned the words, “Brave hearts so young, yet not too young to die!” 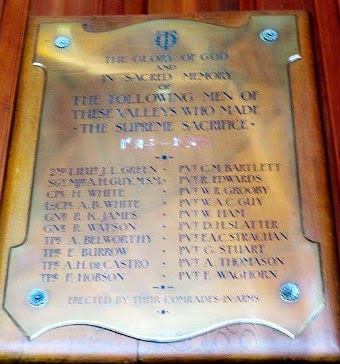 William Arthur Belworthy is commemorated at the Hill 60 (New Zealand) Memorial at the Hill 60 Cemetery on the Gallipoli Peninsula, Turkey, at the site of the original WWI trenches.

In New Zealand he is listed on the First World War Roll of Honour on the granite tablet at the Devonport Primary School, Auckland, and also on a brass tablet inside St James Anglican Church, Ngatimoti, Nelson.