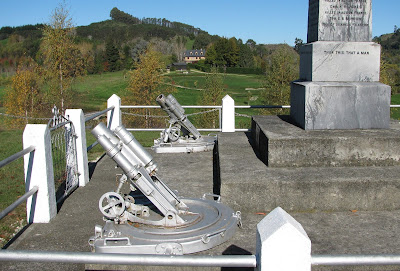 Intriguing curious tourists and delighting several generations of small boys who've grown up playing games around them, the guns at the Ngatimoti war memorial are German Minenwerfer trench mortars and were war trophies brought back to New Zealand  from the Western Front. Trophies of this sort were very popular after the war and there was a lot of rather unseemly competition between the various towns and communities in New Zealand keen to get their hands on one.

The intention was originally for trophies to be displayed at a purpose-built War Museum in New Zealand, but this never happened. A large number of trophies had already been collected and a considerable amount of dithering about what to do with them ensued. In the end they were mostly distributed around the country to the various local authorities who had put in requests for them.

On 25 November 1919 Lieutenant Vincent Gordon Jervis was appointed Officer in Charge of War Records and Trophies in New Zealand. Jervis was also appointed as the permanent secretary to a Central Committee established at Defence Headquarters in Wellington, consisting of the various Officers in Charge of Intelligence, Supplies, Administration and Finance within the Army. The committee’s purpose was to ‘deal with all questions connected with War Records, Base Records, Histories and War Trophies.' A General Headquarters Instruction was then issued, outlining the distribution procedure to be followed for trophies.

Those war trophies definitely identified as having been captured by a particular unit would be forwarded to that unit’s Headquarters for distribution. The rest of the trophies would be pooled, and after the Dominion Museum had selected suitable items for display, the balance of the weapons would be allotted to various districts on a pro rata basis. The Commanders of the four Military Districts were thus to ‘set up District Committees of all Expeditionary Force Commanding Officers in their Districts, to make final distribution.’

By 22 December 1919, the majority of the N.Z.E.F.’s trophies had arrived in Wellington and Lieutenant Jervis was requested to supply a list (in quadruplicate) of ‘1. All trophies received in New Zealand and which are Regimental property. 2. The remainder of trophies received’, together with a list of ‘all applications received from local bodies for allocation to their District of war trophies.’ (1) 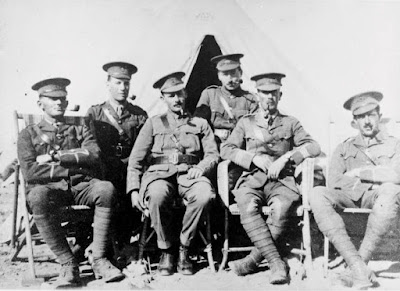 Lt-Colonel Cyprian (Cyp) Brereton from Ngatimoti, former commanding officer of the 12th Nelson Company of the Canterbury Infantry Battalion during the war, was asked to approach the Defence Department for a suitable trophy by the Ladies' Committee in charge of the Soldiers' Memorial project - very likely in the form of his wife Daisy Brereton (nee Guy), who was the Committee's chairwoman.  Brereton made quite an effort to get these particular mortars for the Ngatimoti memorial because they were of personal significance to him and his men. When he applied to get a trophy or trophies for the Ngatimoti War Memorial he was originally offered something else altogether by the Office of War Records and Trophies and he wangled a swap for the Minenwerfers instead. The Officer in Charge of War Trophies, Vincent Jervis, had been one of Brereton’s subalterns in the 12th Nelson Coy. and no doubt went to some trouble to accommodate his former commander.

Records show that the allocation of the mortars to Ngatimoti had been confirmed by 8 October 1920, but it's not clear when they actually arrived, though it must have been quite a logistical exercise to get them to Ngatimoti. Mention was made at a meeting in July 1922 of a proposed fence "18 feet square where the guns were to be mounted ouside of the gates", indicating that they had either been received or were expected soon. It seems that ithe intention at the time was to have them mounted at a distance from the memorial rather than sitting on the steps surrounding the obelisk itself as we're used to seeing them. In the event, the fence around the memorial was not erected until 1923, and the mortars were placed on either side of the memorial instead.

Minenwerfer trench mortars caused a great deal of physical and psychological harm  to the Allied soldiers at the Western Front and Brereton speaks about this in his wartime memoir, “Tales of Three Campaigns”.  For a time in July 1916 the 12th Nelson Company men were stationed at Sector No. 3 at Armentières, a spot known as "Minenwerfer Alley" because it was constantly bombarded by mortars. The shells launched by these mortars (Minenwerfer means "mine (shell) launcher") emitted a particular warbling shriek which had a very unnerving effect on the men sitting in their trenches wondering if it was their turn to cop it this time. Because of this noise the Allied troops nicknamed the Minenwerfer shells "Moaning Minnies".

“The German Minenwerfer held pride of place as a topic of popular conversation. It seemed to figure in every sentence, and evidently the huge bombs from this mine-thrower had made a deep impression on the company. Judging from the talk, people spent long hours in the trenches looking up into the sky and dodging these shells of nearly of nearly 200 pounds, packed with high explosive and, easily seen and heard as they soared high in the air and dropped vertically. At the top of their flight they were popularly supposed to to pause in order to select someone’s living-place to drop upon, and the wobbling sound as they fell was said to be 'Where’s your bivvie? Where’s your bivvie? Where's your bivvie? Thud!'

The company sector was noted for the number of these undesirable visitors, and rejoiced in the name of ‘Graham’s Post’ or ‘Minenwerfer Alley’”.   --- C.B. Brereton  (2)

It very likely gave Brereton and those of his men who did return to the Motueka Valley a great deal of pleasure to see them subverted to the cause of "defending" their homes. Minenwerfers came in different sizes, and our memorial ones are at the smaller end – probably the 7.58 cm light trench mortar version shown in the photo below. As also shown in this photo, they would originally have been mounted on gun carriages, and apparently, until it rotted away, part of the wooden gun carriage to which it had been attached was still visible beneath one of the Ngatimoti mortars for a number of years after they were installed. 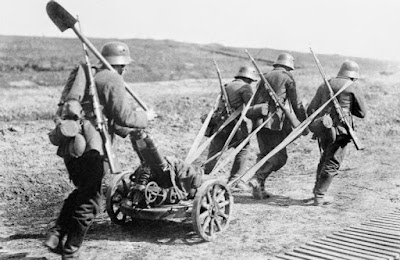 Many of the war trophies brought back to New Zealand were destroyed by the military during periods of social unrest between the First and Second World Wars, lest they fall into the hands of dangerous elements like unionists, Communists and (God forbid!) pacifists. Others were vandalized, stolen, junked, like Brereton's Turkish pontoon, as embarrassing reminders of a jingoistic colonial past, or else lost to the depredations of time - a fate the Ngatimoti mortars were close to suffering. A recent and timely initiative led by Ian Davey and members of the Motueka Valley Association has seen the memorial mortars refurbished and given a new lease of life. (3) Enough time has now passed to enable us to see the First World War in its historical context and once again appreciate the sacrifice made 100 years ago by the young men of the Motueka Valley and their families. There are very few WWI Minenwerfer trench mortars still in existence around the world today. Ngatimoti is fortunate to still have these rare trophies, and hopefully future generations will continue to value and care for them. 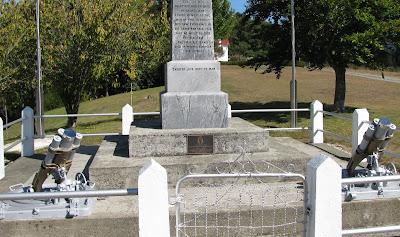 Refurbished mortars today.
Sandblasting revealed that they were partly constructed of brass
so have been repainted to reflect that detail.

1) Fox, Dr Aaron (1987) “Silent Sentinels: The War Trophies of the First NZ Expeditionary Force in War and Peace.”
Thesis prepared for the University of Otago.
http://www.kiamatetoa.com/drathesis.php

Mortars at the Ngatimoti Memorial
A. McFadgen