Motueka Settlers in December 1843, as recorded by William Fox.

On 1 December 1843, William Fox , Resident Agent for  the New Zealand Company in Nelson, sent a report summarizing the extent of European settlement and activities in the Nelson area to the Company 's Principal Agent in Wellington, Colonel William Wakefield. [1] William Fox was the NZ Company's second Nelson Agent, having been appointed to the post after the death of the first, Captain Arthur Wakefield, at the Wairau Incident at Tuamarina in Marlbrough on 17 June, 1843.

The following is an extract from Fox's report “giving a cursory account of proceedings of the agriculturalists” in the Motueka district.

"Leaving the available part of the Moutere district to the left and keeping along a range of fern hills for about eight miles westward, again descending and crossing the Moutere River about a mile from the mouth, we enter the Motueka district where the first settlers encountered are Messrs Morse, Murray and Rogers who are cultivating in partnership.They arrived in the Colony by the "Mary" in August last (1842), and lost no time in proceeding to their land, where they commenced operations with great spirit. They probably have about twelve acres in crop this season and have already built a good house, large enough to accommodate all the party. [2] 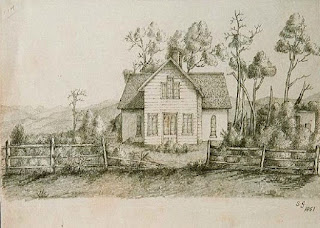 A mile further westward is Dr Greenwood, a gentleman of education and general experience, married and with a large family. He has not been long on his land, and its swampy nature required considerable drainage, which he has affected, and is now building a very substantial log house.

Near to Dr Greenwood is Mr Fearon, an active settler. He has cleared an acre of bush land, and cropped it and a little adjoining fern and flax land. Further west are Messrs Moore and Heaphy who have cropped two or three acres of bush land. Captain Thoms has erected a saw-mill, worked by a water wheel of twenty horse power, which is now in operation and likely to work at a profit. [3] Some orders have been received from Hobart Town, where good timber is scarce, and probably some of the Australian colonists will prove customers. There is also a considerable demand for sawn timber in this settlement.

"Woodlands"
Greenwood family farm in Motueka , with homestead to the right.
Watercolour by Sarah Greenwood (1852)

In this district are also several cottagers, but few of them have done much towards cultivation. A number of roadmen had taken a section here, but were recently driven off with much violence which has deterred others from taking land. I believe however, the confidence is so far restored, that some of the most courageous of the number are again inclined to try the experiment. Crossing the the Motueka [River], a walk of four miles brings us to the Riwaka River, a very pretty past of this settlement. The principal settler here is a Mr [Samuel] Stephens, last assistant surveyor of the Company who has built a house and got three of four acres in crop (barley and potatoes). He has a cow and some smaller stock. Mr [Thomas] Brunner, (one of the improvers) [4] has brought two or three acres into cultivation and has built a house. A considerable number of small occupiers are to be found here among whom one of the name of [William] Askew deserves particular mention for his indutry and perserverance. He has induced several others to take land, and some remain on it who were about quitting. He has established a Sunday School in his own house." 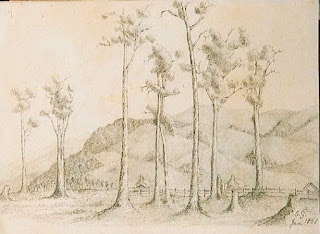 
2) Sarah Greenwood recorded around the same time that Nathaniel Morse, George Murray and William Rogers "have set to work with great energy, and have already engaged twenty labourers to assist them". The partners set up their farm at Section 201, situated today at the Jubilee Bridge end of Central Road in Lower Moutere. At that time their land lay northwest of the mouth of the Moutere River and could be accessed directly by boat via a loop in the river which passed close to their boundary. The first to plough land at Lower Moutere, they had a very efficient operation going and in June 1844 Samuel Stephens noted that they were running about 25 head of cattle and 600 sheep.


3) Captain Thomas Thoms (appointed Motueka's first Magistrate), had some issues with his land, which he'd bought from from his neighbour, Captain Frederick Moore of "Poenamu Farm". Moore was Motueka's earliest settler, taking up his land in May 1842, however he didn't have official title to his property but held it through a personal arrangement made with its Maori owners. Moore's common-law wife Paru was connected to Motueka Maori who  were less than impressed with Thoms digging a pit on what they regarded as their land and Captain Wakefield had to come to Motueka to negotiate a deal with local Maori giving Thoms legal rights to his section.

Thoms fell ill not long after arriving in the area and passed the management of the mill to Dr Greenwood and his friend Captain Fearon. They hired a young American carpenter to help them out. Leonard Stilwell came from a sawmilling family well established in the village of Brooklyn, New York. He crewed for a time with the American whaler "Flora" but jumped ship in Sydney and made his way to New Zealand. Operations at the mill ceased after Thoms' death in 1845 but Stilwell continued to work for Dr Greenwood, who granted him the use of a ten-acre block of land in Riwaka . He named it "Brooklyn" for his hometown, and this name still attaches to the area. Stilwell's son Richard purchased the farm from Dr Greenwood after his father's death.


4) An "improver" was a settler with sufficient funds to "improve" his land by clearing it, setting up an operational farm and hopefully providing employment for others.