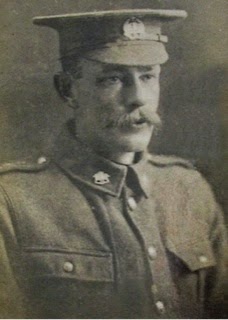 Ralph was born in Lower Moutere, on the outskirts of Motueka, on the 30th of January, 1887, to Alfred Rutland Edwards (1844-1906) and his second wife, Harriett, née Winnett.
Alfred was the oldest son of George Mathew Edwards and his wife Eliza née Rutland, who along with seven of their children emigrated from England to Wellington, New Zealand, on the Mariner in 1849. Several Nelson-bound passengers, having thankfully set foot on terra firma, refused to go any further, but the Edwards family were made of sterner stuff and amongst those who then embarked on the William and Alfred, arriving in Nelson on 6 August, 1849.  By 1855 they were living on land they owned at the corner of Grove and Tasman Streets. (1) George also bought two other properties nearby - one on the corner of North Road and Weka Street], which went to his eldest son Charles, who after marrying died relatively young, leaving no issue. A second on the corner of Tasman & Halifax Streets was divided in two, with half going to his daughter Emma who married a Thomas York (brother to Henry York of Riwaka) and the other half to hissecond son Hnery, became very successful businessman.


Alfred (known as Alf), his brother William (1842-1904), and a cousin by the name of Rutland Turner (known as Peter), initially jointly ran a farm on leased land at Bishopdale, Nelson, but by 1870 Edwards Bros are recorded as paying rates to the Moutere Road Board. William and Alf had settled as farmers in the Lower Moutere area, each with their own holdings, somewhere within the area bounded by Central, Edwards and  Holdaway Roads and the Lower Moutere Highway. (2) Alf also had a couple of blocks of land in the Waiwhero Valley and it's possible, but in no way confirmed, that he may have been associated with the Edwards' tent store which provided supplies for gold-diggers at Mt Arthur in the mid-1870s at what was then called Edwards' Clearing but is now known as the Flora Clearing. Alfred, possibly  based at Section 201, Lower Moutere, had sizeable holdings, where he ran stock, grew crops and developed raspberry gardens. Ralph attended the Lower Moutere School from about 1893-1899 – he is recorded as winning a Special Prize for Writing at the Lower Moutere School end-of-year gala in 1894. (3) The Church of England played a major part in the family's lives and they would have attended Sunday services at St Thomas' Anglican Church in Motueka when possible. 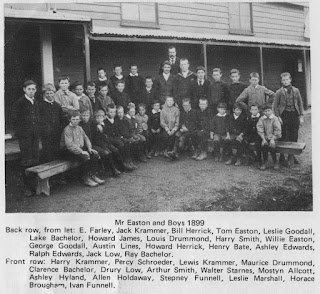 Ralph Edwards (3rd from the rt)
and his younger brother Ashley (4th from the rt).
Two peas in a pod in the back row

Alfred Edwards was active in both the Lower Moutere and Motueka communities – he first appears as an elected member of the Education Committee for Lower Moutere in June, 1876. He was on the committee organizing the Lower Moutere Diamond Jubilee Celebrations in 1897 (4) – the actual events were held on his land (probably a memorable occasion for the young Ralph and his siblings) - promoting the freezing works project in 1899 and arguing for work to be done on the Moutere River in 1900.  He was on he committee of the Motueka Fruitgrowers Co-operative (he spoke at the Co-op’s 1902 opening ceremony as the Company’s representative), and a founding member in 1903 of the commitee for the proposed Motueka Harbour Board. He was also a Justice of the Peace and a member of Motueka’s St Thomas Anglican Church Vestry and the Nelson Diocesan Synod’s Motueka Trust. (5) Following his death in 1906, the Nelson Diocesan Synod spoke of their appreciation for his work on the Diocesan's behalf and voted to extend their sympathies to his family.

The Edwardses lived near another Lower Moutere pioneer, Walter Guy, whose only son John Arliss Guy served on several local committees and boards alongside Alf Edwards, and was also closely involved with the Anglican Church, first in Motueka and later at Ngatimoti, where his father bought several parcels of land and donated the site for Ngatimoti's St James Anglican Church. John Guy remained closely associated with his father's Lower Moutere property for many years and at times his sons, Walter Jnr and Hector, attended the Lower Moutere School with Ralph. (Both Walter Jnr and Hector were killed during the war and are commemorated at the Ngatimoti War Memorial.) As was fairly common practice for the time, Ralph probably left school at the age of fourteen and worked fulltime on the family farm.

Alfred married twice – firstly in 1866 to his cousin Mary (Polly) Turner , by whom he had 5 living children. Mary died in 1875 and on 2 April 1878 he married again at All Saints Anglican Church, Nelson, to Harriett Winnett , who was mother of a further 6 children, all born at Lower Moutere, including Ralph and his brother Arthur Rutland Edwards (1881-1954).

In 1903 Alfred moved with wife Harriett and his blended family to Motueka where he built a house on a 3-acre block  at what is now 492 High Street South. It was named "Stony Morton" from the area in Worcestershire, England where Harriett grew up -  Stony Morton, also known as Abbotts Morton. (6) Around this time Ralph and his older brother Arthur started the Edward Bros. sawmill at Pokororo on the West Bank of the Motueka River. This could have been sited on land up the north branch of the Graham Valley bought by their father Alfred in July, 1904, from the Beatson brothers, Guthrie and George. A fire in 1905 destroyed the mill plus an amount of valuable timber and was significant enough to make the news. (7) Whether they regrouped and carried on milling is not known, but they were obviously taken with the area. Their father died in 1906 and in 1908, possibly with money inherited from his father's estate, Arthur bought in his own right three adjoining blocks of farmland near the Pearse Valley at Pokororo - Section 5, sqare 7, Section 46, square 7 & Section 47, square 7 - from the three sons of Frederick Horneman, an early local identity who was a Captain with the Nelson Militia c.1860 (8)


This land was later bought in 1920 by Oliver William Cole and the area became known locally as Cole’s Beach because of its long river frontage. Oliver Cole had 2 daughters and a son, Norman, who played a significant part in the founding of Riverside Community in Lower Moutere. Under the name Edward Bros., Ralph and Arthur operated this large farm jointly, chiefly as a sheep and cattle run. The home they built was constructed of thick upright boards held together with dowelling - this particular type of house did not have lining or joints. When the house was later pulled down, parts of it were used to build the smithy of Lawrence (Tod) Heath in Ngatimoti, near Black Bridge. Both Arthur and Ralph were keen members of the Nelson Agricultural & Pastoral Association and exhibited their best animals at A & P shows. (9) The prime carcass of a prize-winning cattle beast of which Ralph had been particularly proud, was exhibited at Fairey’s Nelson butchery after Ralph’s death as a tribute to him. (10)

Ralph's name was drawn in the 8th Ballot of Nelson-Marlborough men from the 12th (Nelson) Recruiting District. (11) Aged 31 and single, he enlisted as a Private with "C" Company (i.e. the 12th (Nelson) Company) of the Canterbury Infantry Battalion on the 20th of June, 1917,  Ralph was promoted to Lance-Corporal while training at Featherston but as per standard procedure for soldiers with no previous experience in the field, reverted in rank to Private on arrival in France, where he was transferred to No 2 Entrenching Battalion. Specialising in digging trenches and other earthworks, in April 1918 the 2nd Entrenching Battalion was part of a NZ brigade including the Cyclist Battalion and the NZ Field Artillery, which t served in the Battle of Lys, in sight of the Messines Ridge. Ralph was killed in the field there on 14 April, 1918, shot while raising his head above the parapet to snipe at the enemy (12)


Family legend has it that Ralph left his devoted old dog, Carlo, with his family when he went off to war. Every day without fail Carlo would take up his station at the gate, waiting for his master to return. One day he suddenly jumped up and went to sit under Ralph’s bedroom window and posted himself there instead. This behaviour was so unusual that the date it happened was clearly recalled  - 14 April, 1918. When the news of Ralph's death arrived, the family soon realised that the day of Carlo's odd behaviour had uncannily coincided with the very one upon which Ralph had been killed at the Western Front. (13) 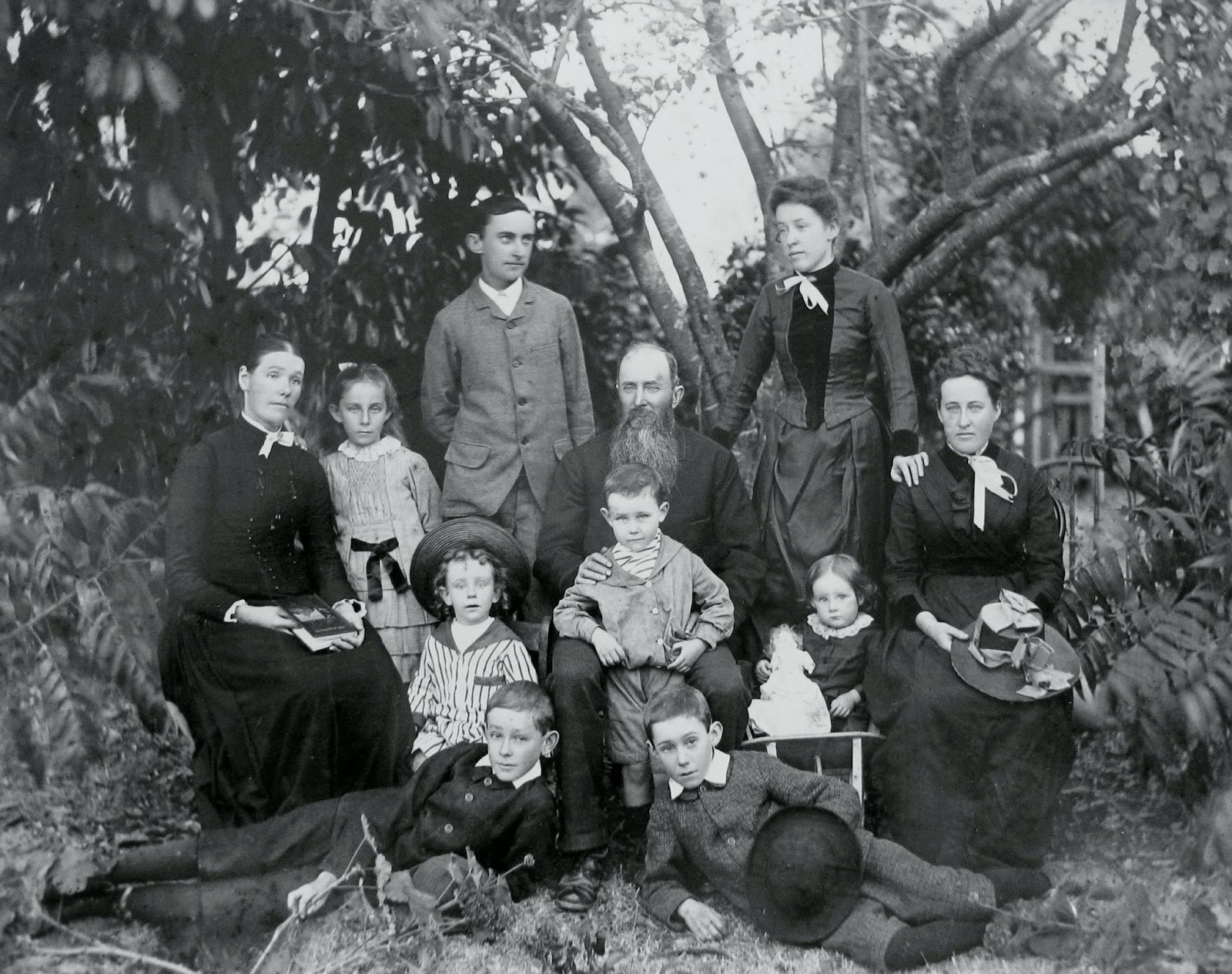 Arthur kept the Pokororo farm going on his own for a while, but sold it in 1920, and moved into town where he bought a few acres of land and built a house on the corner of today's High Street South roundabout, close to his mother's - this house still stands next to Hawthornden, the home of his sister May and her husband Lyulph Rhodes (still standing today behind the Toad Hall cafe complex). Arthur married Mabel née Gilbert and raised a family there. (14) His mother stayed at her Motueka home just down the road until her death on 21 April 1931. She was buried next to her husband at the Motueka Cemetery.

Ralph is commemorated at Messines Ridge (NZ) Memorial – like many others, his actual grave remains unknown. In New Zealand he is honoured at the Motueka War Memorial. He is also listed on the Nelson-Tasman Roll of Honour and his name is inscribed on a brass tablet located inside the St James Anglican Church at Ngatimoti, Tasman.  A commemorative inscription was added to his father Alfred's headstone at the Motueka Cemetery: "Ralph C. Edwards killed in action Flanders 14 April 1918, aged 32 yrs".

A cousin, Arnold Richard Edwards, also served - he was the son of Ralph's uncle, William, by his third wife Mary Ann née Wallis. He returned home after the war to run his family’s farm, Brentwood, in the Central Road area of Lower Moutere. Another of Arnold's cousins is also commemorated at the Motueka Memorial - Philip Robert Wallis, son of his mother’s brother Richard Dockery Wallis and his wife Clara. The Wallises lived at Hulmers, for many years run as an orphanage by Richard D. Wallis' parents, Richard and Mary Ann Wallis.

Through his step-sister, Eleanor (Nellie) Edwards, who married Edward Archibald (Arch) Funnell, Ralph was also related to Edward Walter (Tommy) Funnell, who served with the 23rd Reinforcements Specialist Company, Machine-Gun Section. After the war Tommy Funnell operated as a carrier under the name E. Funnell & Co. His business was later subsumed into the freight conglomerate Transport Nelson (TNL). Tommy donated land for the Lower Moutere Hall, built after the Second World War.

Group photo of Ralph aged 3 with his father, mother, siblings and step-siblings, courtesy Mr Brodie Goodall (Edwards family).
This photograph was probably taken at t "Brentwood",  Edwards' family home at Lower Moutere, thought to have been on Central Road.