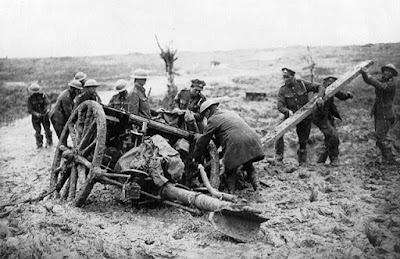 “Hell on Earth” was what they called Passchendaele in Flanders (today Belgium), and its name has long been a byword for the horrors of the First World War on the Western Front. For New Zealanders, though, it has also become synonymous with what is thought to be New Zealand’s greatest miltary disaster in terms of the number of lives lost in a single day.


As part of a failed attempt by II Anzac Corps on 12 October 1917 to capture Bellevue Spur during the First Battle of Passchendaele, the advancing Kiwis soon found themselves in trouble as they encountered fierce enemy resistance and swampy terrain transformed by previous battles, mass troop movements and relentless driving rain into a churned-up quagmire. They struggled to make headway in the deep, clinging mud, unable to stabilise their field artillery or bring forward heavy guns for cover. Shells fired from behind in support either sank deep into the muffling muck, exploding ineffectually in fountains of ooze, or fell short, doing more damage in "friendly fire" to Allied troops than to the Germans. Trapped by barbed wire and exposed to raking fire from German machine-gunners in fortified pillboxes on the ridge above, they had no shelter but the water-filled shell holes in which many men drowned. Another push had been planned for to take place at 3.00 p.m, but by then the magnitude of the failure  had become clear and the Allied offensive was merdifully called off.

Although the Germans called an informal truce and refrained from firing on stretcher parties, conditions were so atrocious that it took two days to retrieve the wounded lying in the half frozen mire between the lines. It took 4 to 5 hours to get each casualty to safety, and at times the stretcher bearers themselves had to be rescued after sinking up to their armpits in the morass while carrying their burdens.

The toll was horrendous. Among the New Zealanders alone there were about 2700 casualties.These included about 950 men who were either dead or mortally wounded; 842 men are officially listed as dying on 12 October, and the rest succumbed to their wounds in field ambulances and hospitals behind the lines in Belgium, France and England, some many weeks later.

Among those casualties are two commemorated at the NgatImoti War Memorial. Les Green and Hector Guy were both grandsons of English settlers who came in the early days to live at Motueka. Their fathers had taken up land at Ngatimoti, and both worked on their parents’ farms. They went to local schools, hunted in the hills, mucked around on the river. They worked hard but were always up for a bit of fun, and trained together with their local Territorials’ unit  - the 12th (Nelson & Marlborough) Infantry Regiment - captained by Ngatimoti man Cyprian Brereton.

Both jumped to enlist in August 1914, when hostilities with Germany broke out.  Now members of the 12th (Nelson) Company, Canterbury Infantry Battalion, commanded by Major Brereton, on 16 October 1914 they were among the group of Ngatimoti ‘s first volunteers who sailed off to the war from Wellington on the troopship “Athenic”, with the Main Body of the New Zealand Expeditionary Force. Both took part in the campaign on Gallipoli and were hospitalised in England as a result before being deployed to the Western Front.


One hundred years on, let’s spare a thought for these two high-spirited young men who would never return to their friends and families in our peaceful Motueka Valley, but remained among the countless lost dead whose names are recorded at the Tyne Cot Memorial to the Missing at Zonnebeke in West-Vlaanderen, Belgium.


And a shout out to another "Blackest Day" casualty at Passchendaele from the Canterbury Infantry Battalion whose name is also recorded at the Tyne Cot Memorial: Private James Daniel "Dan" Tomlinson (1876 -1917). A carpenter from Waimea West commemorated at the Brightwater War Memorial Gates, as a relative-by-marriage to the Grooby family who still farm at Greenhill Road, he nonetheless counts
as a Ngatimoti connection.

Note: Although the official number of those New Zealanders actually killed in action on 12 October 1917 is given  by the NZ Ministry of Heritage & Culture as 843,  you'll notice if you read different accounts that this number is given variously as being between 842 and 846. This discrepancy is due to the difficulties in establishing exactly who died during the offensive itself and those wounded who died in the field before they could be rescued.

WWI00: Counting the cost of Passchendaele
Military historian Ian McGibbon explains how he came up with the number 843 currently accepted as the official number of NZ deaths on the "Blackest Day"

"Utter desolation": An eloquent eyewitness account. Transcript of a letter written by Private Leonard Hart to his parents on 19 October 1917 which pulls no punches, describing in graphic and gripping detail his impressions of the Third Battle of Ypres at Passchendaele on 12 October 1917.
NZ History website

From Cairo to Ngatimoti (Hector Guy)
The Prow: Stories of people and places from the Top of the South