The first farmers in the Motueka Valley planted orchards for their own use with a wide variety of fruits such apples, plums, pears and peaches, the excess often being traded in exchange for grocery items with  Motueka retailers like Manoys and Rankins, who did regular deliveries with store carts around Ngatimoti. Early varities of apples grown  were Sturmers, Cox's Orange, Washingtons, Epp's Seedlings, Dunn's Favourite, Rokewood and Lord Wolseleys. (1)

By the turn of the 20th century commercial orchards were well-establishedin the area, however transport to markets was a major issue and pests like codlin moth and woolly aphids were a real problem - codlin moth was reported as creating havoc in apple crops as early as 1892. (2) Growers tried a number of remedies including mixtures of tobacco and soap and also placed lamps in trees. Some removed grubs form the trees by hand, a very time-consuming task. James Chapman from Pangatotara, one of the biggest local orchardists, grew Siberian Crab and kept an accurate account of the large number of grubs he caught in one season. (3)


In the Lower Moutere, farmers and orchardists gathered in June 1896, with John Guy as president to discuss establishing a marketing agency in Wellington to sell their produce. They propsed to follow up with a meeting at Ngatimoti. John Guy had ties to both Lower Moutere, where his father Walter had a farm on Central Road and ran his own farm on Waiwhero Road at Ngatimoti. He also served as the local postmaster for many years., running it from a room in his home at Ngatimoti, called 'Sunny Brae".

In September 1906 the Motueka Orchardists Association arranged distribution of a paste of arsenic of lead in 3lb lots to Association members and could be obtained from Barty Lloyd and Herbert Thomason and others. Another method used to control disease was the spraying of apples with arsenate of lead, lime-sulphur and Bordeaux sprays. Fruit was graded by hand and packed in 40 pund cases, the cases being made up on wet days. The fruit was mainly shipped to Wellington but any profits were swallowed by costs.

Orchard inspector Mr Hallam visited Ngatimoti in March 1910 to describe packing techniques. The Ngatimoti Association fruitgrowers marked their cases "One Bushel Choice Apples Grown by Ngatimoti Association, Nelson, New Zealand", plus the growers' initials. (4)
By January 1910 there were six canning factories operating in Motueka, and March that year saw a trial shipment of apples for England loaded onto the "Paparoa"- the first direct export of fruit. The fruit included apple varieties Scarlet Permain, Pippin, French Crab and Prince Alfred. The first ocean-going steamer to visit Nelson, the "S.S. Paparoa" arrived in England on 10 May 1910 and not surprisingly, some of the fruit was reported as over-ripe. (5) Among the local growers recorded as sending fruit were:


An account of the annual Nelson District Fruitgrowers Association meeting for 1910 shows that Ngatimoti growers played an active part in the organisation.  (6)


In 1911 Mr H. Haycock picked 92 cases of apples from 11 trees, with two trees yielding 32 cases. James Remnant from "Roseneath" farm on Waiwhero Road, was one who exported apples on the "S.S. Rimutaka"; Jonathans and Munro's Favourite. The condition of the apples after the voyage remained a concern.

James Remnant's apple crop ws badly damaged during a violet hailstorm on 29 December 1912, the fruit suffering perforation and pitting as a result. This would have represented a significant loss.


In May 1913, Mr Thorpe, a Government fruit expert, gave demonstration of apple packing was given in Jim Remnant's orchard to a number of interested spectators and Mrs Remnant supplied afternoon tea afterwards.

By 1914 the Nelson district, including Ngatimoti, was described as having extensive plabntings of apple trees.

The idea of setting up a local pack house at Ngatimoti was first mooted at a meeting held at Ngatimoti in July, 1916 , under the auspices of Nelson District Fruitpackers' Ltd, with a special committee formed to look into finding a suitable site and possibilities for building a local packing shed. The committee appointed consisted of Neville Pownall, Albert Leslie Cederman, George & Guthrie Beatson, Tom Strachan and Herbert (Bert) Canton. A possible site at Pangatotara was discussed.

A further meeting devoted to the subject of a Ngatimoti packing shed was held in early July, 1916.

A  rough and ready grading and packing shed was ultimately set up on the flat on the foot of Church Hill, almost opposite the site of the former Ngatimoti creamery, close to the Brethren Meeting Hall which was in a layby near the foot of the hill. The land on the flat then belonged to James Remnant. He had an apple orchard on his land at the top of Church Hill on the Waiwhero ridge, so it would probably have been in his own interests to have a packing shed nearby. The land on which the packing shed stood remained in Remnant’s hands – perhaps a rental was paid by the growers who used the packhouse?


Local orchardists took turns working at the packhouse and it appears to have been in operation into around 1925, but apples were soon superseded by a much more profitable and reliable crop; tobacco, which remained the Motueka Valley's horticultural staple from the late 1920s until the 1990s.

Pat Beatson, whose father George had a farm at the Ngatimoti Peninsula,  noted:

“A good many local farmers were caught up in the orcharding movement and a co-operative grading and packing shed was built at Ngatimoti near where the Brethren Hall then stood. The shed was built under the shady side of the hill, making it a cold place to work.
Alas, for many farmers in the district this new venture was fairly short-lived, at least in the outer fringes of the fruit-growing area. The first great enthusiasm was waning: many growers found there was no golden bonanza. The export marketing organisation was slow in becoming firmly established and a good many growers depended on local markets. I’ve no idea what happened to the Ngatimoti packing shed but as far as I know there is now no sign of its former existence”.

Although the old Brethren Hall still stood in situ when we McFadgens came to Ngatimoti in 1980 (on what is now the site of Graham & Jenny Grant’s house), there was no sign then of the pack house on the flats below Church Hill, which were at that time part of our farm. It has been established since that Fred Biggs demolished the old packing shed around 1945, a few years after buying Jim Remnant’s farm. 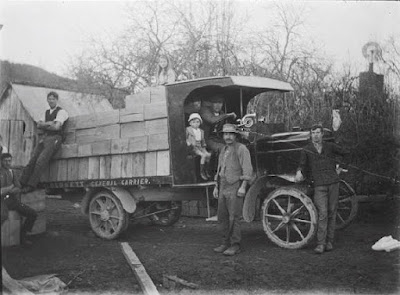 Local carrier Arthur Berkett’s truck loading packed apple cases at Ngatimoti.
The man with the hat standing in front of the truck is almost certainly
James Remnant, owner of the land where the packhouse stood
and the packhouse is probably the building in behind.
Photo: Nelson Provincial Museum, Guy Collection, ref 315134

1) Whelan, Helen. Ngatimoti is in the News: Part One. Apple Orchards. (Unpub. ms)

Whelen, Helen. Ngatimoti is in the News. Part One. (unpub. ms)
Copy held by the Motueka & District Historical Association

Note: this instructor was very likely to have been John Herbert Thorp, a fruit inspector who took a job with the NZ Agricultural Dept around 1900/1905. He moved to Nelson in 1912 to support the rapidly  expanded fruit industry there and became the first manager of the Government Research Orchard at Appleby.
See:
"Nelson Evening Mail", 25 Aug 1937, pg 4
Transfer of Orchard Instructor: Mr J.H. Thorp Leaves Nelson.
https://paperspast.natlib.govt.nz/newspapers/NEM19370825.2.38

Inside the Ngatimoti apple packhouse, packers not identified.
Date ca 1916-1922
Photographer: John Edward Salisbury (1861-1924), a man of many interests
who ran a 650 acre farm known as "Middlebank" at the junction of the Lloyd Valley and Thorp-Orinoco Roads.